Those of you who have been reading this blog for a while know that I LOVE the Olympics and during the summer Olympics in London I tried out some events like taekwondo, fencing and synchronized swimming with varying degrees of success. So as the competition in Sochi heats up, and the icky saga of Bob Costas’ eye drags on, I set out to see if I could master some winter events. And I started out with a bang, literally. I got a concussion.

Speed skating is one of those sports that appears effortless when experts do it. Each stride is so powerful that at times it almost seems as if they are skating in slow motion. I knew it would be a challenge, but I thought I could master at least the large arm swings associated with the sport.  The kind folks at the Bay State Speed Skating Club provided a sizable list of supplies for me to collect and bring to my first lesson.  There were so many elements needed, I ended up looking like a sporting goods store’s back room: volleyball knee pads, a hockey neck guard, gloves and my ski helmet (you will understand the importance of this in a moment). After gearing up and strapping on my loaner speed skates I was ready to hit the ice.

Speed skating is all about the quads. The correct positioning for a speed skater is a low crouch, so that each stride is powerful. Your arms are less for balance than to amplify the power of the legs. When a speed skater goes around the turn of the track, they lean very far in to the turn, which again is all quads. 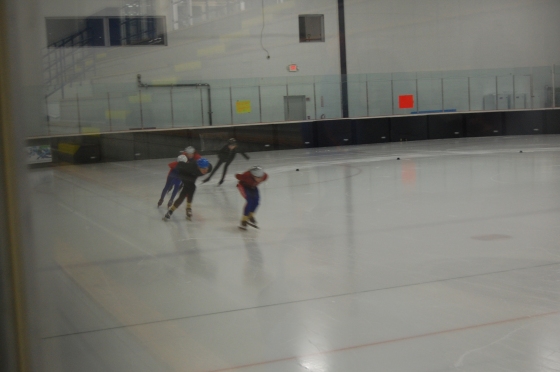 My problem began just about as soon as my blades hit the ice. Speed skates have a much longer blade than the figure skates of my youth. They are completely flat on the bottom, with sharp edges on both sides. On just my second lap around the rink I misjudged the length of my blade (my muscle memory was thinking figure skates) I clipped the back edge of one blade on the tip of the other skate and down I went. Hard. The back of my head slammed against the ice and bounced up before my entire body came to rest on the ice in a heap, the wind totally knocked out of me.

Tod, my speed skating tutor rushed over and asked if I was ok. I lied. He asked me if I wanted to stop. Again, I lied. I had barely been on the ice for 10 minutes, I couldn’t give up now, I thought. But in fact I probably should have; my head was killing me, my vision was blurry, my balance felt off and my confidence was non-existent. Continuing on was not so much about me being tough as it was about not wanting to seem like a wimp. This blog has helped me make such strides in becoming unafraid, gutsy, and strong that to stop almost felt like a regression.

For the next hour I moved around the track at a glacial pace, it was as if I had never skated before. I was so nervous about falling again that I wasn’t able to throw myself into this adventure the way I usually do. Five-year-olds were lapping me, many time over. But Tod was incredibly patient, always staying only a few feet from me and at one point holding my hands while I practiced cross-overs in place (Yes, I was basically a 5’8” toddler).

See how low Tod is? See how not low I am?

I have rarely felt such an odd, controlled, slow motion fear in my life. It wasn’t as if someone was chasing me and I was running for my life.  I was putting myself in this situation, moving at a snail’s pace, knowing something was wrong with me and terrified to fall again and hurt myself further.

Although my vision was blurry, I could see the skill of the other skaters around me. They ranged in age from 5 to their 50’s of varying skill levels, all more advanced than me, of course. I could tell they were all having an amazing time. Some of them were former hockey players, others were long-time speed skaters, there was another adult who was brand new to the sport. While I was not able to experience all that speed skating has to offer, I gained a new respect for what speed skaters are able to do: hug tight turns, skate at very high speeds, and most importantly maintain their balance.

Don’t worry about me. A week after my fall I am feeling much better; no more headaches, my vision is once again clear…I’m pretty much back to normal (or as normal as I usually am). But I’m going to be less afraid of seeming like a wimp in the future. Sometimes safe and practical is the way to go.

I’d like to thank Kim, Tod and all the wonderful folks of Bay State Speed Skating Club. Despite my fall, I learned a great deal and I encourage anyone who is interested in speed skating to attend one of their classes. Just don’t forget your helmet. I was not compensated for this post in any way.

4 thoughts on “Olympics Endeavors: Starting Off with a Bang”