I continue my celebration of the Summer Olympics with Synchronized Swimming, which began on Sunday in London. I have never known anyone who participated in this sport and didn’t know much about it, which of course meant I had to try it. I now realize Synchronized Swimming requires a lot of strength, coordination and grace in addition to water-proof make-up and exaggerated smiles. I thought it would be difficult to find an organized “sychro” (as NBC seems to call it these days) program, but thankfully I was wrong. The Andover/North Andover (Mass.) YMCA has an extensive program for children ages 6 to 19. They currently have 80 team members.

The Y’s head coach and team director, Svetlana Malinovskaya, was kind enough to offer me a private lesson seeing that the team is made up of kids, and swimming with them may have seemed a little creepy. Svetlana was a member of the Belarus National Team from the ages of 15-24 before moving to the U.S., so I was in very capable hands.

I arrived, uncharacteristically late and a little flustered, quickly changed into the only one-piece bathing suit I own, threw on my brand new swim cap and goggles and scampered onto the pool deck. Svetlana let me borrow her nose clip – more about that later – and we jumped into the pool as little girls wearing big smiles did laps of the pool; but they were not swimming laps of the pool. They were vertical in the water with their heads bobbing just above the surface and they were moving at a pretty good pace. I wondered if I could be as good as these eight year olds. Maybe one day. 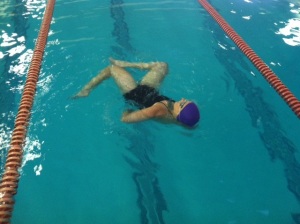 I am sculling underwater to spin myself around like a pinwheel

Svetlana and I started out with the basics: sculls. They are the hand movements synchronized swimmers use to propel them in different directions in the water. It’s all wrist action, tiny paddles under the water and the direction in which you move your hands dictates which direction you will float in. I did a layback (exactly what it sounds like, laying on your back at the surface of the water) and sculled in different directions. We then added a back somersault under the water. Svetlana explained this as if it was the next natural (and easy) step. For me, it was not. I could not get myself around. Svetlana said I could use my arms to power me around in a circle. That advice resulted in a wild flailing of my arms attempting to turn underwater.  I ended up floating to the surface, usually butt first. Despite my roly-poly nature in the water, Svetlana said I was a fast learner. Obviously, she was being very, very kind. I have to admit, despite appearances, my nose plug made things so much easier! I could struggle to somersault under water with relative respirational ease without water flooding my sinuses. I may buy one just to have.

Practicing headstands against the wall of the pool

layout position). Getting into this position was tough enough…but then you have to scull to move your body around in a circle or in a specific direction. It never occurred to me how much physics is involved with successful synchronized swimming. As Svetlana explained to me, our lungs, being filled with oxygen, are our natural flotation device.  For women especially, it’s the weight of our hips that make us sink. In order to have control and stay, for example, upside down in the water, perpendicular with the surface of the water, your hips and lungs must be right on top of each other on the same line, meaning you have to keep your body rigidly straight.

Next I learned one of the most important moves in synchronized swimming: the eggbeater, which is similar to treading water in that it keeps your head above the water, but you are not using your arms – they are forming elegant circles above the water.  During eggbeaters each leg is rotating around in a circle from the knee down, but each leg goes in a different direction, hence the name. As I struggled, the little girls on the synchro team were doing eggbeaters around me – this move is now second nature for them, but as a novice, it made me feel totally uncoordinated. It’s similar to trying to tap your head with one hand and rub your tummy with the other. I just couldn’t get the rotation right without concentrating really hard…but then I forgot to smile, which is very important in the sport. I could get my hands up in a V, but then I would slowly sink because my eggbeaters were not quite strong enough to keep me afloat. As my head slowly slipped into the water despite the thrashings of my lower body, both Svetlana and I started to giggle. Yes, a grown adult barely keeping her head above water – both literally and metaphorically – during a synchronized swimming lesson is a funny sight. I even caught some of the little experts trying to contain their laughter as they continued with their laps.

Before I tried Synchronized Swimming it seemed to be one of those sports that tends to be the butt of jokes, not to mention SNL skits. In some ways I chose to try it because I thought it would make for a ridiculously funny post. But the joke was on me. Not only is it quite difficult, I actually really enjoyed it. I even asked Svetlana if there was a program for adults. Sadly, there is not one in Andover, but she said Worcester has a “masters” program for adults…while I am far from being a master (I didn’t even get to point of synchronizing my new moves in time with another swimmer), I may be one day.

One thing Svetlana said really resonated with me. As I writhed under the water trying to do a backflip, and came up for air with a smile on my face, she remarked that she was surprised that I seemed to be having such a good time. I wasn’t getting outwardly frustrated, and usually adults struggle with wanting to be too good too fast. I told her that I used to be like that (and boy was I). I wanted and expected to be good at something right away, despite never trying it before. Now I can see that it’s rather arrogant to think that way. But trying all these new things for this blog, week after week, seems to have made me unafraid of being terrible at things.  I am more open to the unknown now, happily ready to try new things for the experience of it, not necessarily to excel them. My inhibitions have disappeared and where this Type-A girl once stood, amazingly, a fearless young woman now stands…or floats as the case may be.

I can’t thank Svetlana Malinovskaya enough for taking time out of her buys day to spend a few hours in the pool with me. The Andover/North Andover has a great synchronized swimming program, and I encourage anyone with little girls to check it out. I was not compensated in any way for this post.