This post represents the one that got away. During my recent “Olympic Endeavors,” when I attempted to master different events, I wanted to learn to row, but could not squeeze it into my personal Olympic fortnight. But on a recent weekend in Chicago I was able to make my sporting dreams come true.

I arrived at the Lincoln Park Boat Club to meet my coach for the day, Lev. Lev is a former Russian champion and agreed to help me climb into a scull, metaphorically speaking. But attempting to climb into said scull is where the trouble started, literally speaking. I truly did need some assistance getting into the boat. Balancing on one foot on a dock, while slipping the other into a shoe bolted to a boat that is bobbing in the water may sound easy…well no, it doesn’t sound easy either.

Lev and me, notice I am doing all the work

Once I finally got into the boat (a double with Lev seated behind me) the lesson began. I understood the basic movements, but rowing it’s not as easy as hopping on that erg in the corner of the gym. Lev instructed me to always keep my left hand above my right, but my two hands should never be more than two inched from each other. This alone was difficult, and I kept knocking my knuckles. Ouch! You also need to master the flicking of your wrist, which is what turns the oar’s blade to allow for alternatively cutting down on drag (when it is skimming above the water) and increasing drag (when you are pulling it through the water).

There were a lot of things that I had to remember to do at the same time and some strokes were better than others. When I was not doing something quite right Lev was not shy about telling me. There was, however, a slight language barrier. Yes, Lev is from Russia, but his English was not the problem. He was using rowing terminology that I was not familiar with, and when I did not response appropriately to his corrections, he would just yell them louder, which did not help my understanding of the situation. Because he was sitting directly behind me in the scull, his frantic gesticulations that were meant to help me understand him, went completely unnoticed. What I did notice was the ever-increasing frustration – maybe it was desperation – in his voice. And I was getting frustrated and desperate as well. Lev kept telling me to relax my shoulders which I was clenching up near my ears out of stress. How could I relax with this tiny Russian hollering in my ear? 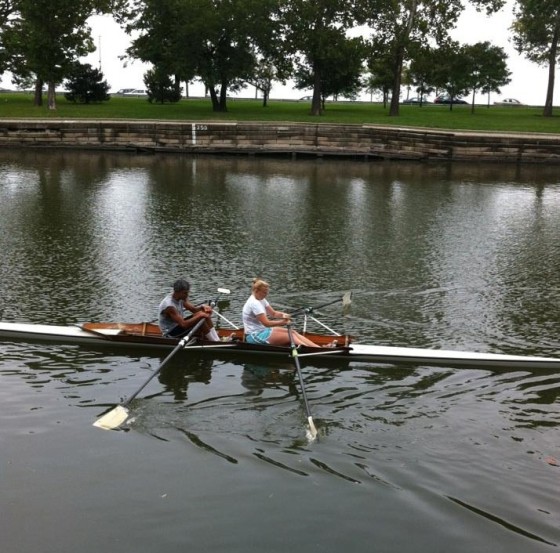 I would have one or two good strokes, but the third would be missing a critical element. At one point Lev told me to concentrate on using my legs to put some power into my stroke…that’s when I lost every ounce of technique that I had managed to scrape together.

I eventually found my groove. I was still knocking my knuckles but my stoke became more fluid as I got more accustomed to the movements, and doing them all at the same time. It took several hours, but by the end of our time on the water, Lev even said that I was a natural rower and implored me to continue taking lessons when I returned to Boston. I think he was being very kind.

What was surprising – or after 50 posts maybe it shouldn’t be — is that when Lev and I were talking about non-rowing things — where I was from (Philadelphia by way of Boston), his homeland of Russia, what brought me to Chicago (to visit my aunt, a competitive rower) — I was not so worried about my stroke, and that was when Lev said my stroke improved. When I wasn’t worrying about being good at rowing, I actually became good (or at least goodish) at rowing. This simple fact comes up again and again on these adventures of mine. Thank goodness I keep being reminded that I don’t have to be perfect at everything, this time by a mad Russian. Maybe one of these days it will sink in.

It was touch and go there for a moment, but I ended up really enjoying rowing; you are on the water, looking at beautiful scenery and working out.  Many thanks to Lev for his help and patience. Thanks also go out to my fabulous aunt, Ann Kinnealey, who made this day possible. I was not compensated in any way for this post.

2 thoughts on “Row This Boat Ashore”