I hope you didn’t think a concussion could keep me down!  Just like Bob Costas, I’m back in fighting shape in time for the second week of the Olympics. This week I tried curling, a sport that sometimes seems to be the butt of many Olympic jokes, but I found it to be my kind of sport: a fantastic combination of strategic and social.

I started my curling adventure with Greg Eisenhauer of the Broomstone Curling Club in Wayland, Massachusetts. Broomstone was established in 1968, and now has about 325 adult members and 80 junior players. Greg was kind enough to give me an introduction to the sport, and even let me “deliver” a few stones.

A curling team consists of four members: the skip who is the strategist of the group and offers his team members direction, the vice who releases or “delivers” the stone (which is exactly that, a stone that has been cooled for at least 24 hours), and two sweepers who, yes, you guessed it, they sweep those brooms that have come to personify the sport.

The sweeping can smooth the pebbled ice surface (resurfacing curling ice required a totally different technique than a typical ice rink’s zamboni, it includes scraping the surface first than dripping warm water in a process called “pebbling”) to make a stone slide further. You can sweep near both your, and the opposing team’s stones, but you can’t touch the stones with the broom, that’s called “burning the stone.”

Once Greg explained the basics of curling to me it was time for me to hit the ice and deliver some stones of my own. All members of a curling team wear special shoes that allow them to slide on the ice. For no one are these shoes as important as for the vice. A vice launches themselves from something that resembles the starting block in a track meet, and slides across the ice in a lunge-like position, bringing the stone along with him or her, until they gently release their grip on the stone, which then slides the rest of the way to the other end of the lane on its own.

Outfitted in a loaner pair of sliding soles, I took to the ice and started sliding. Greg gave me a plastic frame so that I had a little more balance (which, after my speed skating fiasco, was much appreciated). My first problem was that I was lunging too aggressively, bashing my knee on the ice, instead of gently letting it skim the surface of the ice.

Eye on the prize

But practice makes perfect, and after a handful of attempts, and a few falls (thankfully landing on my butt instead of my head this time) I got the hang of it. I was able to glide across the ice, deliver the stone somewhat elegantly, and have it come to a stop inside the house, if not on the button. Curling does take a lot of coordination, but as I have learned over and over again on this blog, the more work it takes to master something, the more rewarding it is when you do indeed master it. And even when I was slip-sliding over the ice, I was having a great time and both Greg and I were laughing.

I am really concentrating on not falling over!

What I loved about curling was that it’s technically challenging, strategic and collaborative. Working together as a team can be a challenge in itself, cooperating both verbally and physically at the same time ups the ante. But as Greg explained, and as I saw by watching the matches that followed my lesson, curling is a very social sport. I could see teammates and opponents laughing and joking in between throws. And the best of all, the winners buy the first round once the match is over. This is my type of sport. 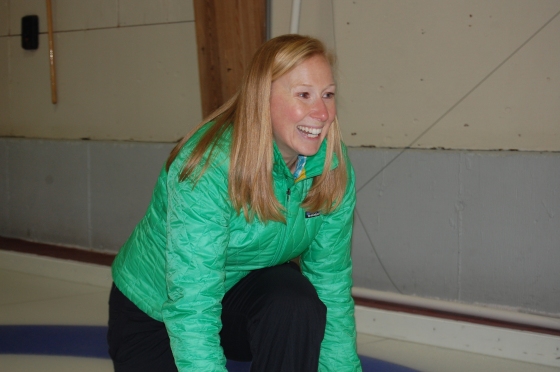 Many thanks to Greg Eisenhauer from the Broomstone Curling Club. They offer leagues nearly every night of the week, if you are interesting in getting your curl on. I was not compensated in any way for this post.

One thought on “Olympic Adventures – Curling”