With Mother’s Day just a few days away, I decided to celebrate by trying out my own mother’s passion and see if that old adage of the apple never falling too far from the tree is true. In fact, it is clear that my apple fell a substantial distance from my mother’s tree, so I knew this adventure was bound to be a very interesting experiment.

In the past I have described my mother as quirky on the pages of this blog, but I am not sure if that adequately describes my loving mother.  She is a newly retired professor and occupational therapist, who dedicated a great deal of her life to helping individuals with physical and intellectual disabilities. She is also an animal lover, who raised my brother and me not to be squeamish – and in fact, to love – all animals, including slimy ones such as insects, lizards, snakes and other creatures that typically make people squeal, or jump on top of chairs.  The fact that we pick bugs up and release them instead of squashing them is a point of pride for her. Having said that, just this past weekend she observed, “Emily, we are very different people.” And she is correct.

Since retiring, my mom has stepped-up her volunteering at the Schuylkill Center’s Wildlife Rehabilitation Clinic and she loves it.  I will never forget how giddy she was when she got vaccinated for rabies. She was not giddy from relief after being bitten by an aggressive, rabid animal, but giddy out of excitement, because now she could work with raccoons at the rehab center. As she animatedly told me over the phone, “many wonderful animals are susceptible rabies!” 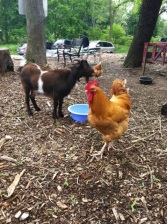 Fankie the goat and the center’s roosters

The Schuylkill Center accepts all sorts of sick, injured or orphaned animals in need including birds, possums, bunnies, squirrels, ducklings, goslings,  raccoons, hawks, turtles and recently a celebrated bald eagle. A baby chihuahua with cleft palate, and an abandoned goat have recently ended up there as well.  Frankie, the goat, now serves as unofficial mascot for the center.  He hangs out outside with the chickens and roosters and occasionally head-butts visitors (or maybe just me).

Early one morning this past weekend when I was home in Philadelphia for a visit, she took me with her to feed injured and abandoned birds. The bird room is small, with many of the newborn birds in an incubator.  Older birds who are self-feeding are in mesh, cloth cages, so after changing their cages and getting them fresh food they were good to go.  But the newly hatched birds have to be hand-fed and their nests cleaned, once an hour. This is even more attention than a newborn human requires! This task sounded daunting when we arrive bright and early at 8:00 a.m. and the fact that our shift didn’t end until noon, made me thing that maybe I had made a mistake, and would have preferred to spend my morning in bed.

As we got started, my mom demonstrated and talked me through how to feed the birds (she has been trained to handle most of the animals at the center). She mixed up some green goop the color of guacamole and the consistency of french salad dressing that she said is the perfect diet for songbirds. She loaded it into a syringe-like vessel and demonstrated how to stick it down the birds’ throats when they are gaping and squeeze the songbird food in. 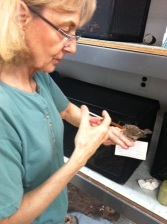 My mom feeding a little finch

Birds instinctively gape, and in the wild that is when their mothers feed them from their own mouths. You have to place the syringe far down their throats and bypass their air hole. This all sounded way too complicated, and rather scary. I was very worried that I would choke my new feathered friends so at first I just watched and practiced making clean nests for them out of toilet paper–part of the cleaning process. My mom fed finches, wrens, starlings and a just-hatched robin that resembled an alien or a mystery creature from a horror movie.

My mother also cut meal worms in half and fed them to the wrens using forceps. She apologized to me before she cut the worms, because she had always been very vigilant that we don’t kill living creatures, but in this case it was to feed another living creature so I guess these were special circumstances.

After the first hour of feeding it was time for me to participate. I started with the finches and was hesitant at first – concerned that I would hurt them. But just as my mom assured me, they knew what to do. The birds gaped just as they do with their mothers, and I moved the syringe very close to their mouths.  Before I knew it, my little finch gobbled up the syringe and all I had to do was push the plunger – just a little at a time.  Voila!  I had fed my first bird!

Me feeding my new feathered friend

These rounds of feeding continued for hours, but by the time I started feeding the birds myself the time was flying by. The activity is the definition of “therapeutic,” therapeutic for the birds (obviously) but also for the humans. You can’t really stress about work, or your ever-expanding to-do list if you are concentrating so completely on placing tiny mutilated (for a good cause) meal worms in to the mouths of baby birds at various levels of development and dependency.

I have frequently laughed about my mother’s devotion to these animals, but after spending time with them (the birds and my mom) I can see why she loves them so much. As I have gotten older there have been a plethora of moments, too many to count really, when I have realized that my mother is usually right. I shouldn’t have been so skeptical about animal rehab. Maybe the apple didn’t fall that far from the tree after all…

Many thanks to Rick Schubert, Wild Life Rehabilitator, Director of Schuylkill Center’s Wildlife Rehabilitation Clinic and the staff and volunteers of the Schuylkill Center for letting me spend a day observing and participating in all the amazing work they do. Additional thanks to my amazing mom.  She asked me not to use her name, she is not too sure about this world wide web, but she is a pretty special lady! I was not compensated in any way for this blog post.

7 thoughts on “For The Birds”