I mention my family from time to time on this blog. Whether it’s learning about my forbears while trying out life as a genealogist, or tagging along as my mother tends to wounded birds, you have gotten a taste of my family. Now you will get a slightly more literal “taste” of them. We’ll start at the beginning:

In 1939, my great-uncle Tom Kinnealey had just moved home to Boston after graduating from Notre Dame. At that time his brother, my grandfather Arthur, had a produce business in a stall at the Faneuil Hall Market Place. Arthur brokered an introduction for Tom with one of the nearby butchers. Tom apprenticed with this butcher, but soon realized he could do things better. With an investment from Arthur ($500, quite a sum in those days), Tom started T.F. Kinnealey Company. In the years to come, his brothers Joe, Frank and Bill joined him. The company grew from that small operation in Faneuil Hall, to supplying the Army with corned beef during World War II, and eventually providing the best quality meat to restaurants and hotels across New England.  The company outgrew Faneuil Hall, and then a series of other locations around Boston.

My great-uncles Tom and Joe ran the business throughout my childhood, and they have been succeeded by their sons. Tom and Joe were two of my favorites: Tom hosted and played in our annual Thanksgiving football game well into his 80’s, usually without gloves, despite freezing temperatures. I can remember him darting inside between plays to run his hands under hot water, before dashing back out as to not miss more than a few plays. After my own grandparents passed away Joe and his wife Harriet were like surrogate grandparents to me. To this day my holidays and family birthday dinners are spent with their children and grandchildren. I am a very lucky girl.

Today, located in Brockton, MA, T.F. Kinnealey’s serves some of the finest restaurants from Northern Connecticut to Maine and out to Nantucket and Martha’s Vineyard.  Some of my very favorites spots in my South End neighborhood are Kinnealey customers. Cousins now run and work at the company (even more during vacations and breaks from college). I am not one of them, so when my cousin Joe suggested I “get bloody” for this blog, I jumped at the chance to get a first-hand look at what generations of my family have done. Besides, I suspected that I would look ravishing in a hairnet!

I arrived early one morning, although not as early as Joe who is up and at work well before the sun comes up. I had not been to the Brockton plant before, which they moved into in 2008 (although I remember my uncle Joe letting me play in the meat lockers on visits to the old plant on Mass Ave.), so cousin Joe gave me a tour and briefed me on the safety and health procedures before I got started. While keeping my coat on (it was chilly in there), I was outfitted in a white jacket, apron, gloves, plastic sleeves, and yes…that hair net I so badly wanted. 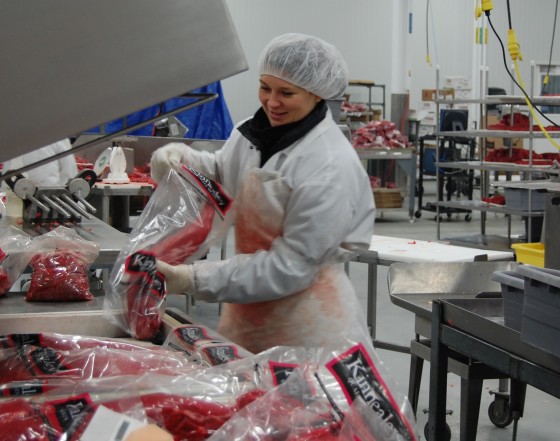 Katie Kinnealey, my mentor for the day

I joined my cousin Katie on the floor and was immediately grateful that I would be learning from someone I knew — and someone who couldn’t get that mad at me if I was really bad at this. Katie and I were working on vacuum packing meat that was headed out the door and would likely be on someone’s dinner plate that night or the next. This took some serious attention to detail in terms of setting all the meat in the machine correctly, and I also had to arrange that meat quickly as to not back up all the orders that were in line. Plus, while the machine was doing it’s thing (sealing) I was packing up more orders. Katie was so patient with me.  And I must admit, I felt a little bit like I got stuck in that chocolate factory episode of “I Love Lucy.” Please note, I did not eat any raw meat, nor did I stuff it down my shirt like Lucy did. 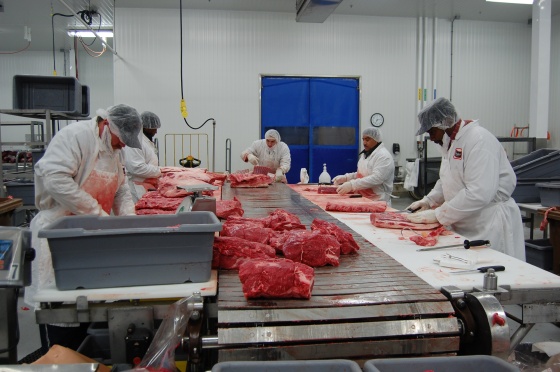 I also spent some time loading pieces of meat into a tenderizer, which uses tons of needles to tenderize meat all at once. After several minutes of layering the meat on a belt that took it into the machine, a kind cohort came gave me a very important tip: I didn’t have to be so careful. These truly are words (for me) to live by. I guess I had been taking a lot of time situating the meat on the belt just so to allow for equal surface area per piece. Who me? Imagine that.  After receiving that sage advice, I picked-up the pace and put the meat on the belt in a slightly less precious way.

Katie packing before we vacuum pack

Halfway though my day I realized that I was in the middle of my first day of real physical work. Ever. There was that one summer at The Top of the Hill Farmers Market, but carrying watermelons (and making a lot of “Dirty Dancing” jokes) does not a hard day of work make. All my jobs have been pretty cerebral, demanding mental push-ups, not physical ones. This was an interesting perspective to gain at this (relatively late) point in my life. It seems that a “hard day’s work” is often judged differently depending on where you’re coming from. My day working at Kinnealey’s was one of the most exhausting days I have ever had; demanding not only physical stamina, but also mental. The proof was in the pudding: the next day I was sore all over especially my back and arms.

Joe had wanted me to try all the aspects of the process, but I stayed with Katie the entire day because a piece of equipment was not working well, so I was actually useful. This made me feel amazing. Instead of being the weak link (well, let’s be honest, under any circumstances I was bound to be the weak link), I was a help. I was also working with a certain zeal because I was genuinely happy and excited to be there. Towards the end of the day, Wayne, the production manager, said he liked my work ethic. I took this as an extreme compliment seeing that I was doing something I had never done before and was taking a great deal of pride in it. He then asked me if I would be with them all week. I said that, sadly, I had to go back to my normal job the next day, but I told him I would come back. And I will, Theo still has to teach me how to cut!

After being elbow-deep in meat all day you would think I would want anything but steak for dinner, but as I drove back to Boston, that was exactly what I was craving. I stopped at the East Milton Market and picked up the makings for a perfect dinner: a Kinnealey steak.

Many thanks to my cousins Joe and John Kinnealey for letting me “get bloody,” with all the wonderful people at Kinnealey’s. Thanks also go out to Katie Kinnealey who showed me the ropes during my day in the meat locker. It’s likely that many of your favorite Boston-area restaurants serve Kinnealey Meats, but you can also visit their retail locations and cook up your own feast at home.  I was not compensated in any way for this post. 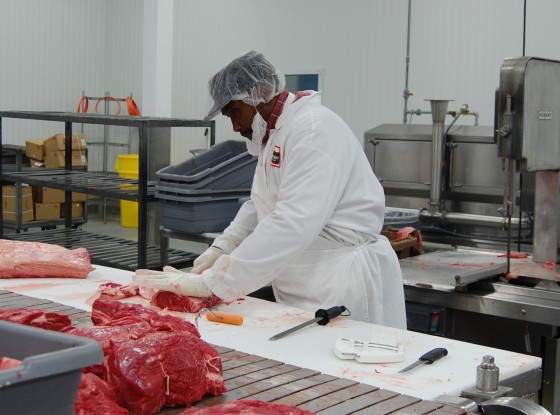 Theo, one of my new friends

7 thoughts on “The Family Way”