One of the suggestions that have come my way more than once is for me to go hunting and chronicle the experience on the pages of this blog.  I take all the suggestions I get very seriously, but I have never felt ready to go hunting, mostly because I have never in my life held a gun. So this past weekend I took one small step towards being only slightly more prepared to hunt: I learned to shoot.

This blog has never been political, and I don’t intent to wade into those polarizing waters now, but let me back up a bit.  I was raised by progressive parents in Philadelphia, where guns were associated with crime, murders and all around bad stuff. After college I lived in New York City, where again, guns were bad. I have lived in Boston for over two years now, and perhaps it’s the city’s proximity to wilderness, but lots of people here not only have held guns, but shoot them on a somewhat regular basis…for sport. I have softened my formerly firm opinion that nothing good can come from owning a gun. I realize that many law-abiding people have been safely trained to fire weapons and hold licenses to own firearms. I am just not one of them. Do I want everyone who rides my bus in the morning to be carrying a concealed weapon? No.  Do I think people who have a valid license to carry a gun should be able to go out to the middle of nowhere and hunt animals in order to cook it up for dinner? Why not! 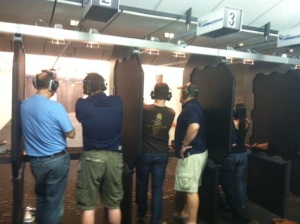 Some of my classmates on the range

I arrived at Mass Firearm School in Holliston, Mass, and as I sat in a classroom with other novices in a “Learn to Shoot” session, I suddenly got a little nervous. Actually a lot nervous.  My instructor was telling us about the NRA’s three rules for safely using a gun (always point the gun in a safe direction, keep your finger off the trigger until you are ready to fire, and something about the ammunition, but because he said he would be handling that  part, I stopped listening and focused on the first two rules) and the gravity of what I was about to do started to sink in in a way that I could almost physically feel the weight. This was serious.  I would be holding this contraption that could hurt someone — possibly myself — if misused. I have not always been good at my new activities at the start, and if I wasn’t good at this I could be dangerous.  Of course, my instructors were there to make sure I didn’t injure any of my classmates…but still.

We went over how to hold and aim a gun using plastic weapons, but even when I held the obviously fake handgun in my hands they started to sweat profusely. This was not a good sign. I started to imagine the gun slipping out of my slippery palms and shooting myself in the leg Plaxico Burress style.

The target from my first try with the .22, not all that good, but I sure look happy!

After our classroom review we moved on to the shooting range. One by one, my classmates and I took our turn firing a .22 caliber semi-automatic hand gun, a revolver and a rifle, at targets 16 feet away.  I was surprised how loud guns are. I literally jumped and yelped each time one was fired. By the time I waited my turn to pick up the .22, my palms were really sweating. I aimed it at the target as instructed, with the near sight lined up with the one at the tip of the gun…then…as if in slow motion…I squeezed the trigger. I had expected the backfire to jerk my body in some direction, but I remained steady on my feet in the “athletic stance” that my instructor had suggested. I wasn’t the best shot with the .22, nor with the revolver that I tried next for that matter, and I had an especially hard time following the first rule to always point the gun in a safe direction, much to my instructor’s frustrations. No one’s perfect.

Me with the rifle

When I picked up the rifle it took a little while to get in the right position.  At first I held it with butt of the gun nestled in the crux in my right shoulder, but it turns out I am left eye dominant, so I had to switch around a bit.  Once I got comfortable, I started squeezing the trigger and to my great surprise, I am a phenom with a rifle. I mean really good! I felt a huge sense of satisfaction when my instructor handed me my target with ten bullet wholes all very close together in the center of the silhouette. Who knew this  girl from the not-so-mean streets of Philly would be a good shot?

I found that there is a little emotional detachment that comes from shooting at a firing range. It can seem a little like playing with a toy gun instead of an actual deadly weapon. I realize that firing a gun at a small piece of paper is very different from firing at a living creature and potentially hurting or killing it, but standing there in my lane with the rifle in my hand I could see how it would be easy to forget that fact. Emotionally I am not sure if I am quite ready for actual hunting (my mother may disown me), but I am no longer afraid of guns, and know how now to be dangerous with one, which is a small step in the right direction.

I am a really good shot with a rifle. Who would have guessed!

I was not compensated in any way for this post.