This past weekend I invited dozens of my closest friends, and some total strangers, over to taste the amber I.P.A. that Matt and I brewed (hopefully) to perfection.  The other goals of the soiree were to create some buzz around, and generate some new ideas for, this very blog. Mission accomplished on all fronts!

I had tried my brew a few weeks before the party, when I confirmed that it did indeed taste like beer, but I had not had an entire bottle yet. Even if I had, I’m not sure if I have a sensitive enough palate to tell if the I.P.A. was really any good. As a result I bought an extra case of beer, just in case. 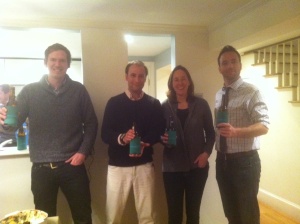 Some of my satisfied customers
Photo courtesy of Erin Wilson

As people filtered in I served the beer in a custom-made koozie with the url for this blog on it (I claimed it was grassroots marketing,which it was of course, but in addition, I couldn’t figure out how to make labels for the bottles). When the first guest said they really liked the beer, I thought they were being polite.  As more people tried it, however, I saw the look of shock on their faces as they told me how great my beer was. It was at that point that I really started to believe that they actually liked it! I felt like Sally Field at the Oscars! I could not believe that it was actually good!  This tasty outcome may make me reconsider brewing again, despite the slow pace of the process.

“Fantastic,” my friend Pete texted the next day.  Another friend, a connoisseur of I.P.A.’s, picked up several undertones (such as florals, caramel and blackberry) that not only was my palate not sophisticated enough to sense, but I’m not even sure which ingredient I can attribute the tastes to.  But I will take all the compliments I can get!

Me and my I.P.A., in its custom koozie, of course
Photo courtesy of Kara Feigenbaum

In addition to drinking — and to my surprise — raving, about my beer, guests were also talking about this blog.  Some people had never met me, and had never read my blog, so it was wonderful to tell them how I embarked on this adventure to find my next passion.  To hear their reactions, observations and encouragement was fantastic. A new audience with fresh perspectives and ideas was exactly what I needed!

In preparation for this party I created a suggestion box. Yes, a good old middle school style, arts and crafty suggestion box.  I encouraged guests to help me brainstorm what I should try next and I got some great ideas…some off-color suggestions…but lots of good, clean ideas that I will pursue and hopefully you will read about on these pages over the next weeks and months.

You can find a sampling of the suggestions below. Boy, oh boy, is this going to be fun! 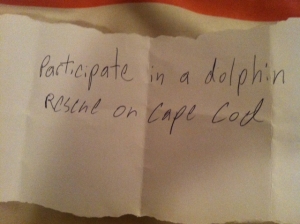 In addition to the suggestions I received in my nifty suggestion box, I always accept suggestions electronically.  Please feel free to leave a comment or email me your bright idea at thegreatwideopenblog(at)gmail(dot)com!