One of the suggestions that came out of my beer tasting party was that I should try more food-orientated adventures. Because I always listen to the requests I receive (please take note and send your suggested adventures my way), I sought out what I thought would be a culinary challenge: learning to make sushi. I love to eat sushi, so at the very least I figured it was a good skill to have. I headed to Sea To You Sushi in Brookline, MA for a lesson on making what is arguably the first “fast food,” dating back to the 8th Century.

The class was packed and it seemed to be a date night for many of my classmates. Wrestling with raw fish doesn’t seem like the most romantic evening, but who am I to judge. Our teacher walked us though the process of rolling a typical inside-out roll a few times and then we grabbed our seaweed and got at it ourselves. For all you sushi lovers out there, here is a step-by-step guide from an (new) expert:

First, take a ball of rice (imagine a killer snow ball. I used roughly a grapefruit-sized ball for two rolls) and work it into a white layer covering one side of the seaweed. My teacher said that you don’t want it to be too think of a layer, so once you press the rice in, go back and pick the excess off if you have any spots of thick coverage.

My sushi ingredients including my snowball of rice

Next, flip your seaweed over and lay out your fish and vegetables of choice long ways on the naked side of the seaweed. I went with salmon and cucumber (there was raw fish available, but I played it safe and started out with the cooked option). 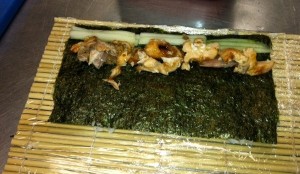 Next, line up your seaweed on a bamboo mat and roll it up. We used a technique that our teacher called “cat paws.” It’s a pretty self-explanatory way to illustrate how to wrap your hands around your rolls. Imagine a cat using their paws on your sushi (appetizing, I know). 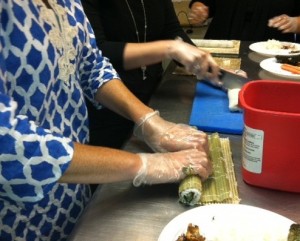 And Voila! A beautiful and delicious sushi roll.

We learned some fancy cutting techniques, but I could not slice my rolls on a diagonal. I think if I used a more robust helping of rice it would have been easier to cut. As an alternative, I went for a straight cut.

We were able to eat what we made and it was yummy. Some of my classmates, those on dates, seemed to be making enough sushi to feed an army, or at least a large dinner party. I, on the other hand, quit after crafting three rolls; and I couldn’t even finish that much.

I thought making sushi was going to be really difficult, but in fact it was rather easy. Having said that, what I have to assume is the most critical factor in a sturdy sushi roll was created before we arrived for class. Namely, we did not make the rice! Sushi rice, or sticky rice as it is also known, has to be just right in order to be rolled into dinner.

While sushi rolling certainly takes some skill, it was a little anticlimactic for me (but I think would make a great evening activity with friends). I hypothesize that’s because my usual adventures have conditioned me to expect these new experiences to be tough! As a result, the fact that I caught on to rolling sushi rather quickly was somewhat of a let down. What does this tell me? No, not that I should up the ante and invest in a culinary torch, but that I really like a challenge. As uncomfortable as being bad at things makes me, I hate things to be easy even more. Please note, I promise to challenge myself more in the future — whether it is physically or emotionally — and share those experiences with you. I know that I am up to this challenge!

This post is not intended to knock sushi making as an activity. It’s certainly fun, and I repeat, easy! Anyone can do it. And I encourage you to give it a try at home with friends…and maybe even a date.