I have made some serious progress on my little bench!  I didn’t post after last week’s class because I had a run-in with a can of wood stain and had no pictures to share.  Let me catch you up: I sanded my bench to get rid of all the little nicks and scrapes it has suffered through over the last 60 some odd years. I learned how to use a power sander, which provides a work-out that I would imagine to be close to that of a shake weight (note: I have no experience with the latter). Then I started re-staining it…and that’s where the trouble began.  My teacher, Paul, gave me clear plastic gloves to keep my hands clean as I applied the stain to the bench with a large wad of cotton (this raw, fluffy cotton is used to cushion pieces of furniture).  I took the gloves off in between staining and wiping the excess stain off.  But when I put the gloved back on I put them on inside out…so stain was caked in every cranny and crevice of my hands.  Hence no pictures. 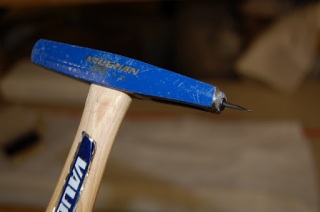 After a good scrubbing with paint thinner (followed by a great deal of moisturizer) I was back in action last night getting acquainted with some new (or at least new to me) tools.  I did a lot of work with a magnetic hammer (in an effort to get the cushion on my seat in place and ready for fabric) and I now feel that ALL hammers should be magnetic.  Seriously, no one would ever hit their finger again.  My teacher had quite a technique, and kids, don’t try this at home, he put at least 10 #4 tacks in his mouth and when he was ready for a new one would stick a tack half way out of his lips, bring the hammer close to it so it would magnetically stick to the hammer then he would drive it into the base of the bench that will support my cushion.  He was really like a squirrel with nuts, except his nuts were sharp and dangerous.  He said he has swallowed three in his upholstery career. I tried this technique once, but got nervous and spontaneously gagged and nearly swallowed the tack.  I decided to leave the stunts to the experts.  Paul even told me that upholstery tacks are sanitized because experienced upholsterers always use their mouth as a staging ground.

So this week I got the seat of the bench prepped with foam, cotton and next week will be fabric time!  I am also looking for my next project…a chair that has springs, but that is not so complicated that it will take a year for me to upholster.  If you have a chair with a medium amount of upholstered surfaces that you would like to become my next masterpiece send me a picture!