I had been a little disappointed to miss this year’s Boston Marathon, as disappointed as one can be when the alternative is a trip to London and Paris. I’m a runner and love watching people just like me achieving their dreams. I had watched a dear friend finish the marathon last Patriots Day. I had cheered her on from about a block away from where this year an entirely evil person decided to leave bombs designed to maim my fellow Bostonians.

I was in London when I received the New York Times news alert that there had been explosions at the finish line. My first thought was that it was likely an electrical glitch with the race timers. It couldn’t be anything more sinister than that, right? This was Boston after all. Moments later my days-dormant phone was buzzing non-stop with texts and emails from concerned friends making sure I was safe. They knew I would likely be there. And they were right, I would have been. This was the second time in my life I have been inundated with these types of desperate check-ins.

Today, days later, I am still away, now in Paris, and I’m having a hard time thinking about anything other than my family, friends, and fellow citizens who are back home and trying to come to grips with this. I wish I could say the typical “I can’t imagine how they are feeling,” but sadly I can. I was a New Yorker on September 11, 2001, and so I know exactly how they are feeling. The fear, the uncertainty and the realization that things may never be the same. All of it.

I wish I were there. Reading articles and watching videos from half a world away doesn’t give me enough of a sense of how my city is truly doing. In the terrifying days following September 11th, at least I was there to feel and see what was happening, as terrible as it was. I was able to hug, and come together with friends and strangers alike in a common sense of loss, and then defiance. Now I am just left to wonder…alone. The Boston I return to on Sunday will be a much different Boston than the one I left.

One thing I know for sure—because I witnessed it nearly twelve years ago—is that while the city may not be exactly the same, it will be back…and better…and safer. Even from across the world, I can already see it happening. Boston and its citizens are picking themselves—and each other—up. Boston is dusting itself off, mourning, healing, and getting ready to show whoever did this that it takes a lot more that this to break the spirit of our city. Any of our cities.

Just like our city, our marathon will also be back, better and safer than ever and I will run it. I never thought I would run another one, but today I am stating for the record that I will run next year’s Boston Marathon, and no psychopath can stop me. I am sure in the weeks and months ahead a group will emerge to help the victims of this terrible attack, and I will raise money for whatever form that effort takes. I won’t be afraid of anything except for Heartbreak Hill…because I’m a former New Yorker, a Bostonian and an American. 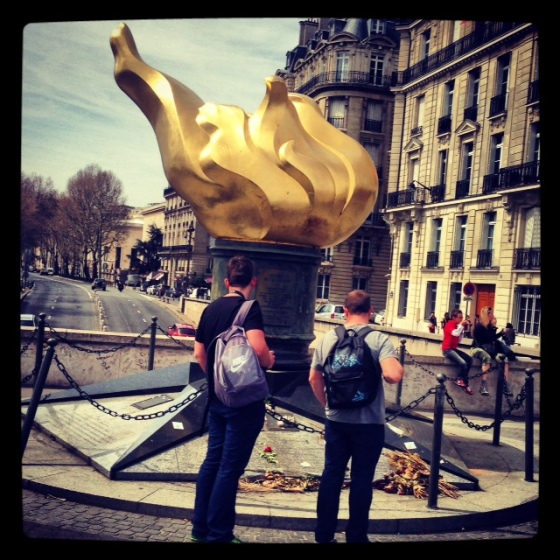 Flamme de la Liberte. I stumbled upon this on the banks of the Seine, a little reminder of what makes America and Boston great.

6 thoughts on “From Paris with Love (For Boston)”