To be honest, (and why lie in a self-indulgent blog read only by a gaggle fabulous friends) my decision to go to trapeze school was a little superficial.  I thought it would be dramatic, provide ridiculous pictures…but I admit it was a gimicie “adventure.”  I never for a second thought I might actually become a trapeze artist or any other type of circus performer no matter how quickly I took to trapeze.  I am not particularly afraid of heights, so I wouldn’t be overcoming a life-long fear.  I was actually more nervous about wearing yoga pants in public than flying through the air two stories above the ground.  But it surprisingly turned out to be a tremendous learning experience for me.

I won’t mince words: I am terrible at the trapeze.  Ter-ri-ble.  Probably the worst person to ever attempt this airborne apparatus. 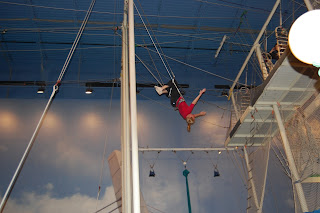 I managed to hook my legs for a second time on my next swing.  The rest of the class was moving on to “catching” when another person on a second trapeze grabs them by their outstretched arms and their legs slide off the bar.  I was feeling pretty proud of myself, satisfied with the experience and comfortable with the skills I had acquired, so I skipped the catching part.  I thought I should end on a high note…and not press my luck.

Thanks go to Laura and Cori for coming with me.  Two familiar smiles in the face if total humiliation and unexpected success made all the difference.  I’d also like to thank all the instructors at Trapeze School New York for their help and their patience.  They believed in me when I did not believe in myself.  They also taught me a very valuable lesson, one that I will continue to work on: Relax…let go.  Its amazing what you can accomplish when you stop stressing.

Click here to see more pictures from my trapeze adventure.  While I took my class at Trapeze School New York, I was not compensated in any way for this post.