I have a secret. While I don’t have Bieber fever, nor do I have posters of One Direction on my bedroom walls, I have something in common with millions of tween and teen girls around the world. My name is Emily, and I am a “Twihard.”

That’s right, while it’s difficult to admit out loud (let alone on this blog), and despite being a writer at heart in addition to a consumer of actual literature, I have also devoured all the Twilight books. I admit that the writing isn’t of the highest quality; but when asked, I cite the “powerful narrative,” of Stephenie Meyer’s series as the reason for my passion, while trying to retain my high-brow authority. In the past, when I have not been able to find a companion to see one of the movies, I have gone to the theater by myself. Sitting in the darkness I am filled with self-loathing, yet completely content at the same time. 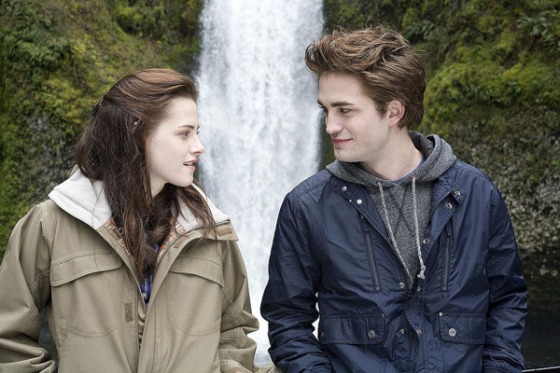 When I was graciously offered a ticket to an advance screening of the last installment of the movie franchise, inside I jumped for joy while attempting to stay cool and indifferent on the outside. To leverage this experience; and make it slightly less shameful, I am using this opportunity to see if being a movie critic could be my next career. I am a writer after all, I do love movies and I did learn from a famed movie critic, so I figure this could indeed be my next passion.

To help in this endeavor, I spoke with John Black, who reviews movies for Boston Event Guide. He provided some sage advice, particularly for my situation, “It’s not about you, it’s about the movie.” I would have to leave my fandom at the door and be objective about what I was seeing. While I did bring a notebook with me to the theater, he suggested that taking notes wasn’t the only way to go. He suggested letting the movie sink in.

While I did not know it while we were speaking, the most critical advice proved to be about the much overused “spoiler alert.” “You can tell when you are spoiling it,” John advised. Armed with this advice I settled into my seat for the film. Unlike my other adventures, this one you can judge. Please, be kind in your comments. And now, without further ado, my review of “Twilight, Breaking Dawn Part 2.” 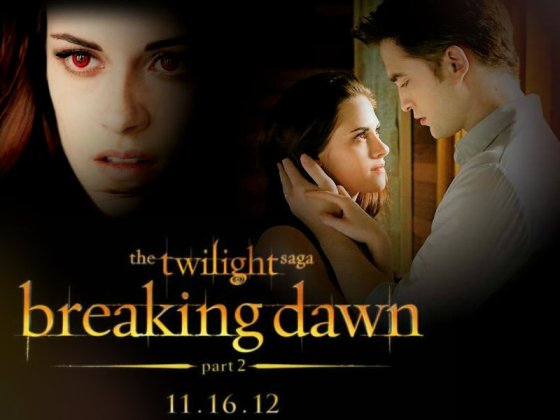 Devoted fans of the “Twilight” franchise will never be disappointed in any of the film adaptations of the wildly popular book series, and the last installment will likely be no different. But for those movie-goers who have not read the books, they too may enjoy “Breaking Dawn Part 2,” because it strays from the book’s storyline in an unexpected and thrilling way.

The movie picks up with Bella, played by Kristen Stewart, in what may be her most impressive performance to date. As the clumsy, awkward Bella Swan is transformed into an elegant and agile vampire, Stewart rises to the occasion and leaves her own awkward screen persona at home. In a majority of Stewart’s roles she has seemingly played her angst-ridden self. In this film she is more confident than audiences have ever seen her. 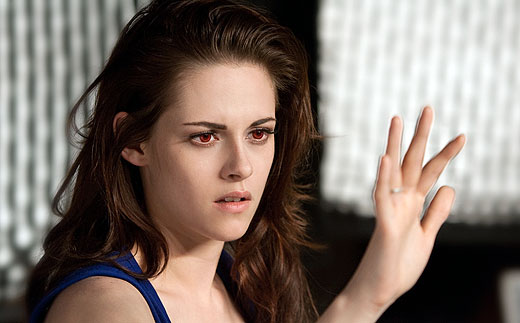 The love story between Bella and Edward, played by Stewart’s real-life main squeeze (as of this writing), Robert Pattinson (who unlike Stewart, doesn’t seemed to have grown his Edward since the first Twilight film release nearly five years ago), picks up with Bella waking from the transformative coma we left her in at the end of the last film. Bella is not only adjusting to life as a vampire, but also to life as a mother to her half-human, half-vampire daughter, Renesmee. Director Bill Condon was given a tall order: the book dictates that the child is beautiful even as a toddler. Although Renesmee, played by newcomer Mackenzie Foy, does have an elegance about her rare for a nine-year-old, the SGI used to put her likeness on the face of an infant isn’t effective. Baby Renesmee shares a likeness with those scary E-Trade Babies.

Just as the Cullen clan settles in with their new member, who as it happens was imprinted upon by the hunky werewolf who once vied for her mother’s affections (a dynamic which when brought to life with actors seems even more creepy than when read), danger finds them…again. The powerful equivalent of corrupt vampire law enforcement — the Volturi — learn of Renesmee’s existence, but mistakenly think she’ s a dangerous “immortal child,” instead if the 50/50 split that she actually is. This sets off a chain of events that diverge from Stephanie Meyer’s book, which if you have been living under a rock are what the movie franchise is based upon.

The plot change comes in two electrifying doses, both of which will leave fans of the books, and newbies to the series, gasping with surprise. Condon takes a chance and it pays-off, elevating the film — which up until that point seemed to be going through the motions set in place by its predecessors — to a new level. 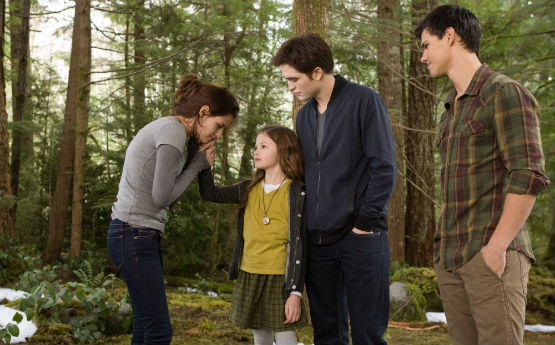 As with the films that came before it, “Breaking Dawn Part 2” has an air of self-parody; at times you don’t know if you are laughing with the movie, or at it. But in this last hoorah for “Twilight,” it seems to accept and revel in its cheesiness, saved by its surprising and dynamic twists and turns, until it delivers you to a happy ending audiences would be outraged without.

This is the best “Twilight” film yet. That may not be saying all that much, but it will certainly satisfy and surprise long-time fans, as well as those who got roped in to going along with them.

I would like to thank Rachel Pope and Jen Mathews for helping to make this all possible. Thanks also go out to John Black for his guidance. I was not compensated in any way for this post.