Sorry for my absence from the interwebs last week, I was trying to squeeze the last few drops out of summer on Nantucket. And while I may have been on vacation from posting, I was not on vacation from doing! I made the most of my time “on island” by learning about possibly the most authentic Nantuckety thing there is: the Lightship Basket. Nantucket Lightship Baskets are distinct in their design and materials, but their origin was less well-known to me, so I rode my bike over to the Nantucket Lightship Basket Museum and got a lesson on this island tradition that dates back over a century.

Before we talk about the basket itself, lets talk about the history. Nantucket is a 105 square mile island off the coast of Cape Cod. It has 10,000 year-round residents, but that number swells to over 50,000 during the summer months. Nantucket was a whaling town for much of the early 19th century, and lightship baskets’ circular construction resembles the barrels which were used to hold whale oil. In the second half of the 19th century many former whalers were stationed on lightships off the coast of Nantucket. A lightship is a moored ship that acts as a navigational aid; think of it as a floating lighthouse. These ships would be moored for months and their crews could get pretty bored. To help pass the time they started weaving baskets, using some of the skills they had acquired on the whaling boats.

A Lightship (Photo courtesy of the Nantucket Lightship Basket Museum)

The baskets have a circular wooden base, and before 1860 these baskets were made free-form, meaning they were shaped without using a mold. These days’ rattan staves are wedged into the wooden base and the basket takes its shape based on a mold. The longitudinal staves have to be exactly equidistant all the way around the base and then rattan reeds are woven one row at a time by hand.

A basket on its mold

The top of the basket is lined with an inner and outer rim, then escutcheon pins are used to hold it in place. Finally cross lashing secures it all together. The average 6″ round basket takes about 40 hours to construct. After 1900, the baskets stopped being made on the lightships, but they continued to be made on the island and were sold to tourists. Still today you can’t go more than a block in town without seeing a classic basket hanging from a woman’s wrist or in a shop window.

The inner and outer rim has been put in place and the lashing is being woven in.

In the 1940s a talented weaver named Jose Reyes created the “friendship basket” and turned Lightship Baskets from utilitarian to a fashion statement by creating a loosely fitted lid for the basket and mounting a carved whale on top. Since then local weavers have been pushing the envelope further by using scrimshaws (another old whaling tradition), and by making clutches, bowls and even bracelets using the same rattan weave that has become identifiable on and off Island. 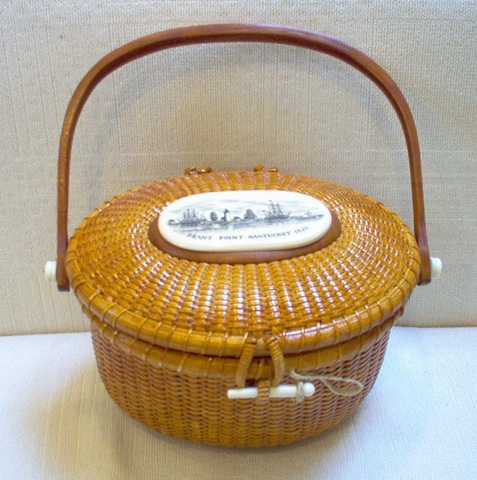 An example of a friendship basket developed by Jose Reyes

Ashlie Emery works at the museum and has been weaving for 20 years. She took me through all the steps of making a Lightship Basket and let me try it myself. It was fun and calming at the same time. You really have to concentrate on weaving the very thin reeds over and under the staves. I was so focused on weaving that I could not think about anything else and I was able to quiet the constant monologue in my mind. And that rarely happens.

Weaving is something anyone can learn (the museum even offers classes for children), but Ashley said it takes time and dedication to become really good. And obviously, those who are really good live on Nantucket. According to the museum staff, there are only 10 professional weavers on Nantucket, meaning they make their living making baskets, and many of them can trace their weaving “lineage,” (meaning those who taught them how to weave) back to the same few early island weavers. There are also tons of hobbyists, who may occasionally sell their baskets. But still to this day most baskets are signed by they artist who made them as they were a hundred years ago.

It struck me that the tradition of these baskets is so much more authentic than one would originally assume. There are tons of objects that are intrinsically linked to their place of origin, but with Nantucket Lightship Baskets the tradition is traced through generations and that tradition continues today with fathers teaching sons. There is also a strong sense of pride associated with the baskets and their history. The Nantucket Lightship Basket Museum opened 14 years ago and has a passionate staff and Board committed to celebrating the heritage and continuing the tradition of this island and its baskets.

Many thanks to Maryann Wasik, Executive Director of the museum, and Ashlie Emery, for taking the time to teach me all about making this truly authentic Nantucket tradition. The museum is open from late April until Columbus Day and it is well worth a visit. I was not compensated in any way for this post.