A few weeks ago I admitted that I had not sung out loud in front of anyone since I was emotionally roughed-up by a 9th grade choir teacher. My friend and loyal reader Chrissy Lamont, brought up the possibility of a vocal adventure over a year ago, and if I am being honest, I didn’t follow up with her as aggressively as I have pursued other bloggy requests. But she didn’t let me off the hook. When she started assembling a fundraising cabaret night to benefit a very worthy cause (a loving couple fighting to retain custody of the adopted daughter whom they have loved and cared for every day of the last three years), I said I would do it! I would face my fears, and sing…out loud…in front of people…who actually paid to hear me (but mostly they paid to hear the accomplished singers who were also set to perform). And just as fast as I agreed to be a part of this special performance, panic set in.

The concert was this past weekend at the Mansfield (Mass) Musical Arts Society. Since my introductory singing lesson with Christine Kasparian, I had practiced “Class”—the duet I would sing with Chrissy—a lot; singing along to the soundtrack of Chicago in the car, and in my apartment (I’m sure my neighbors think I am completely insane…and tone deaf). But I had tucked the reality that I would be singing in front of an audience waaaaaay in the back of my head. It did not seem like reality until I arrived at the theater. 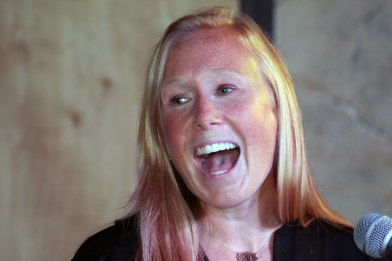 I really killed it during the sound check. I mean knocked it out of the park. I felt relaxed, I had all the lyrics down cold, and my voice sounded strong. But as we crept through the first act my nerves got the best of me. I suddenly had trouble remembering some of the words as I went through them in my mind, my hands were clammy, and my stomach was in knots.

As the intermission came to an end the night’s master of ceremonies, the very talented and funny Rodney Raftery, opened the second act by introducing me and why I was there (obviously, an introduction was necessary in case I passed out on stage). During Rodney’s introduction a vocal child was politely escorted out of the theater while screaming, “No, no, no” at the top of his lungs. He must have known what was to come.

So why beat around the bush any longer, here is what you all have been waiting for: my singing debut.

So not to go all Type A on myself, but my actual performance wasn’t as good as my rendition during the sound check. I was physically stiff. I messed up some of the lyrics. I rushed it a little bit, meaning I started to sing a little early in a few spots, and then a little late in others.

I must have blacked-out while performing, because my time on stage seemed to pass in the blink of an eye. I barely remember what happened. But you know what, I got through it. After the show ended, members of the audience approached me with complements that included “Bold,” “Not bad at all,” and “Brave.” Yes, in this case all these do count as complements. And I was buoyed by their support.

Those positive feelings dissipated two days later when I finally brought myself to watch the video. I was mortified, and still am. Had I not promised to post it for all of you, I may not have. I sounded much better in my head. I’ve had pangs of regret over the potential embarrassment of having this video live on the Internet forever.

But what have I been saying for the last year and a half on this blog? I am throwing myself into life’s possibilities trying to find what I’m passionate about. In the process, I’m not letting fear, my perfectionist tendencies, or potential embarrassment hold me back. And this singing-phobia had been holding me back for 15 years!

So there it is. And here I am; slightly embarrassed after my most humbling adventure to date, but also proud of myself for getting up there.

Anyone want to make a date for karaoke? I know a song…

Many thanks to my dear friends Chrissy Lamont and Rodney Raftery, and all the fabulous performers of The Rose Concert. Your support helped me get through this without loosing my mind…or my voice.