I love oysters, especially sweet oysters. That simple, yet significant fact was my sole motivation for asking the fine folks at Island Creek Oysters if they would let me come and hang out on their farm. I thought I would slide into a pair of waders, get a little dirty, maybe eat an oyster or two and write one of my typical witty posts.

Some of those things did indeed happen, but what also happened was that my mind was TOTALLY BLOWN by all that goes into oyster farming. I had only pictured the end product: big, beautiful, three-inch oysters (it is a Mass. law that oysters have to be 3″ to be sold here) being plucked from the sand to make their way to a plate near me. What I got was a lesson in marine biology, genetics, passion and hard work…all before eating lunch…yes,a lunch of oysters.

Skip Bennett started Island Creek Oysters in 1992, and it’s now synonymous with Duxbury Bay, which is ironic seeing that oysters are not native to the bay. That didn’t stop the Duxbury native. He joined forces with Christian Horne, an oyster farmer from Maine, and started harvesting oysters. More than two decades later they sell over 100,000 oysters a week across the country, and have an eponymous oyster bar on Comm. Ave in Boston.

I arrived at Island Creek with my friend Anne-Marie, a fellow oyster lover, and were greeting by the adorable Annie McNamara who wears many hats at the company. She started our tour by taking us through the hatchery. This is when I realized that oyster farming is not as simple as just harvesting oysters from their beds, at least not at Island Creek. Skip and company have it down to a science…literally. There is so much technology and biology involved with breeding and growing great oysters I almost wished I could take a refresher bio course. Despite taking copious notes, I cannot even begin to explain all the steps and stages, but you can get a great, in-depth over view of the Island Creek process here. 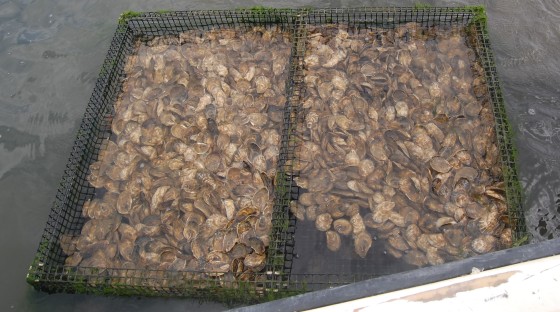 more mature oysters in their crates

Here is my analogy-filled cliff notes version: Island Creek has a “broodstock,” a group of genetically gifted specimens that can grow to become their sweet oysters when they mature. Think of this broodstock as the Tom and Gisele of oysters. There are tons of these power couples, and they are swingers to boot; oysters are sequential hermaphrodites so they can change gender, although it’s tougher to become a female than a male (I’m sure some of their human counterparts would agree). The hatchery is the equivalent of an oyster fertility clinic where they spawn and where new generations of Island Creek oysters start their lives. It’s also where the oysters’ human patrons grow super algae to feed the them. There’s a colorful collection of algae from across the Caribbean that is mixed together, but kept very pure, and becomes almost like a powerful multi-vitamin for the growing oysters. The hatchery is filled with large drums, beakers of varying size, and large-scale equipment that I never associated with oyster farming.

Annie opening up the upwellers under the dock

I was left dumfounded by the hatchery…and then we made our way out to the dock, under which young oysters are growing in upweller boxes made by hand. This was another aspect of oyster farming that I was completely oblivious to. Oysters participate in an 18-month game of musical chairs. The farm crew of Island Creek moves the oysters from location to location around the bay as they grow to keep them in the ideal conditions for that stage of development. The baby oysters are stored in mesh bags within the upwellers under the dock. The mesh is fine enough that the babies won’t fall out. After several 3-4 weeks they are sorted, or “graded.” They are separated by size and all the smaller ones are put together, this allows them to grow and catch up to the big ones. 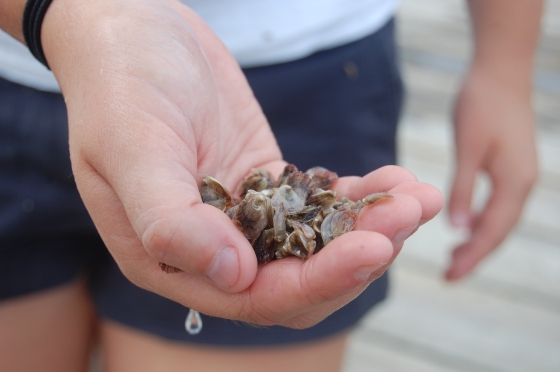 As we finished marveling at the tiny oysters, we were picked up by boat by Skip himself and headed out into the Bay to learn more about the farming operation. First, we visited the nursery, or “the river,” where 5.5 million (yes, five and a half million) growing oysters are stored in mesh bags similar to those under the dock, and placed inside crates. This is the next stop for the oysters after spending weeks in the upwellers under the dock.

The nursery, there are 5.5 million oysters in those crates

Oysters grow quickly. Skip amazed us when he said they grow one millimeter each day or a quarter of an inch each week, except in the winter. In the colder months oysters are dormant, meaning they do not grow or eat. Island Creek has to account for this because they harvest all year round to satisfy they customers who include chefs at fine restaurants across the country including Per Se and French Laundry.

Skip checking on his oysters

I can’t fully explain all the biology and technical steps of oyster farming, not because I fear it will bore you. On the contrary, it was fascinating to learn about all that goes in to producing the Island Creek’s oysters, but it was so complex that I’m not sure if I fully understand it myself.

What I did understand—and admire—was Skip’s passion for, and devotion to, his craft. He has been doing this for 25 years and is constantly trying to improve his oysters and the process of growing them. To that end, he’s still innovating (the hatchery is a notable example), tweaking and striving to do better. And he talks about his passion for shellfish in a way that is contagious and effecting. 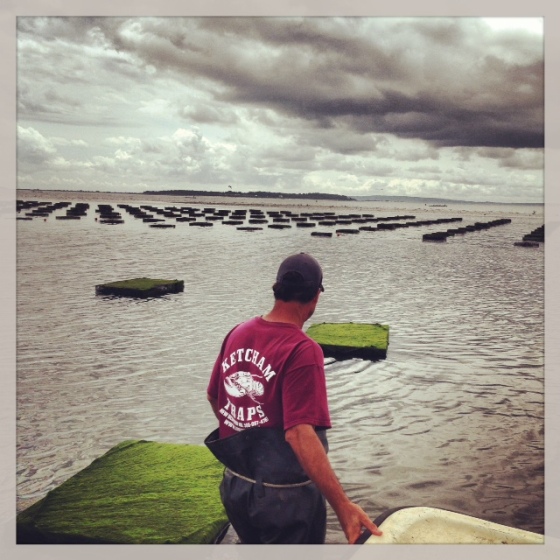 Skip escorting us through the farm

Like all the folks I meet on these bloggy adventures of mine, Skip loves what he does and loves to share his passion with others. When I first came aboard his boat I asked him what his favorite part of the job is. He said he would have to think about it.

After a few hours of taking us around the bay with Anne-Marie and I oohing, and ahhing and peppering him with questions I asked Skip again. “Giving tours,” he said emphatically without even seeming to give it much thought. I suspect our amazed reaction (“Five and a half million?”) to literally everything that came out of his mouth may have helped inspire this response. But Skip inspired us as well. This is my favorite part of my job as well: getting to meet amazing people who take time out of their busy days to share their passion with me. While sometimes these adventures test me, they always teach me something new and unexpected, and they always inspire me.

Before we headed back to dry land, we had to have some oysters of course. Skip shucked Anne-Marie and I a half-dozen each, fresh from the water. They were delicious. The perfect way to end a fabulous day in Duxbury Bay.

Anne-Marie enjoying the spoils of our day on the Bay

I left the farm thinking that I would never look at an oyster the same way again. And to prove that theory, I visited Island Creek Oyster Bar in Kenmore Square last night. When our fabulous waiter Josh placed a dozen oysters in front of me on their cool bed of ice, I looked down at my delicious dinner with a whole new appreciation for all the hard work, innovation and ingenuity that went in to getting them to my plate. My favorite of the bunch were the Row 34s, an Island Creek Oyster that I had discussed with Skip just a few days ago. I shared the story of how these oysters earned their name (based on the rows of cages on the farm) with my dinner companion. “You are an oyster expert,” she remarked.

Many thanks to Skip, Shore, Chris, Tom, Josh, Annie and all the great people at Island Creek for an amazing day on the farm. Island Creeks are my favorite oysters, and if you’ve been living under a rock (or dock) and have not tried them yet, please remedy that situation as soon as possible. I was not compensated for this post (except the oysters Skip shucked for me on the water, and they were delicious). 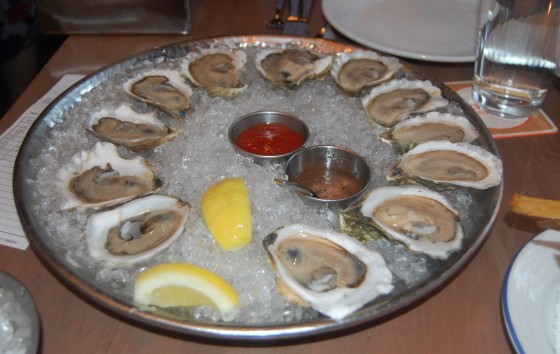 4 thoughts on “The World is Your…”