This week, I had every intention of writing about my experience working retail during the holiday season (and I hope to have that post up in the next day or so), but this week got a little busy and a lot crazy. As it turns out, this week was not about one of my self-inflicted adventures, instead adventure found me…in Seymour, Indiana.

What? You’ve never heard of Seymour? Well that’s ok, neither had I. To give you a better sense of where we’re talking about, if you draw a triangle between Louisville, Cincinnati and Indianapolis, Seymour would be right in the middle. That still doesn’t help? Well, then you have a geography block similar to mine, at least when it comes to the middle of this country.

I traveled to Seymour for work with a colleague and after a long day of flights and scouting locations for the next day’s shoot, we checked into our hotel. We ventured up to the second floor where our rooms were, and there in the hallway we saw three police officers, one of whom had a menacing looking machine gun. As soon as I saw them I turned around to head back down the hallway towards the elevator, but the officers waved us past them towards our rooms. They didn’t say a word, but one held his index finger up to his lips, motioning for us to be quiet. How could we be expected to be quiet with a machine gun in such close proximity? 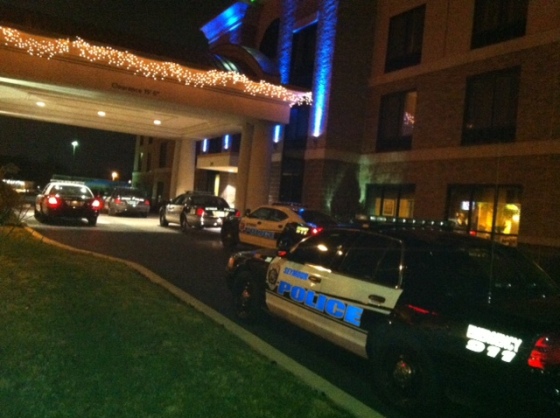 I had no idea what was going on, nor why they wanted us to keep walking, but they were cops so I did as I was told. My colleague and I went into our respective rooms, right across the hall from each other, and just two doors down from the one the officers were surrounding. This was bizarre to say the least. When I got into my room I stayed close to the door so I could hear what was going on in the hallway. The officers were trying to coax a man, we’ll call him “Bobby,” out of his room (I have changed his name in case he reads this, I don’t want him coming to Boston to get me). At one point I definitely heard a dog in the hall.

As if ripped from the pages of a sitcom script, my colleague and I were texting, while simultaneously Facebooking a blow-by-blow narrative of the standoff just feet away. After I asked if bullets could pass through multiple walls, My colleague texted the suggestion that I should get down on the ground. So I did. And there I stayed…for the next 45 minutes. They kept talking to Bobby, trying to engage him in some sort of negotiation, but it seemed Bobby was not in the mood to chit-chat.

Why the hotel staff did not evacuated the building is completely beyond me. At the very, very least, the folks at the front desk should have warned us not to go up to our rooms! I started to get worried that if something serious happened, and if this stand-off ended badly, I would be caught in the crossfire. Was I going to die in the middle of Nowheresville, Indiana…face-down on the carpet of a Holiday Inn Express? What an absolutely depressing end to this blog — not to mention my life. I have a lot more to do and write about!

After what seemed an eternity, we received word from the lobby that things were business as usual down there, so I quickly picked myself up off the ground and sprinted down the hallway, past the police officers, who were still armed, and still motioning for me to be quiet. I have lived in big cities on the East Coast all my life, so it never occurred to me that small town police are less like “COPS” and more like “Reno 9-1-1.” Just bust the door in already and get Bobby out!

The reports from the lobby were correct, people were enjoying their complimentary drinks and snacking on peanuts while watching an increasing number of officers — some with riot shields and gear — parade into the hotel and up to the second floor, all in an effort to convince Bobby to open his door.

We left to get dinner, and by the time we returned Bobby had been arrested. I later found out he was wanted for attempted murder. Yes, ATTEMPTED MURDER! They had a would-be murderer two doors down from me and they didn’t think to evacuate the building, much less the floor. It was one of the most bizarre evenings of my life.

While this experience is not typical of the adventures I share on this blog, I did learn a valuable life lessons, one that I think is well worth sharing: When you see a machine gun run in the opposite direction no matter who tells you to do the opposite.

Other than the stand-off, the Hoosier State was pretty pleasant, but boy was I happy to get home.

3 thoughts on “This Time Adventure Found Me”