Today’s adventure is a repeat. I have done it before, but it’s so important to me — and should be to all of us — that it’s worth doing as often as legally possible. It’s exhilarating, sometimes nerve-racking and always important — and I hope you all have a lot of experience with it. It’s voting!

It’s a simple act that has momentous consequences. We toss the phrase around to the point of triviality, but thanks to the 537 votes that decided the 2000 presidential race in Florida, we have evidence that every vote does indeed count.

There was a long line at my polling place, but my fellow citizens seemed happy to wait

To prepare for this adventure in the voting booth I have been following the various races closely over the past several months (more like years), I researched the issues and read-up on the ballot questions I would be asked to weigh-in on. I have heard people, friends of mine even, say that they don’t vote because they don’t know enough about the issues. Huh? What kind of lazy excuse is that? Have you heard of this little genius-maker they call Google? It can educate anyone, and fast!

Early this morning I was reminded what a privilege it is to vote. After being a duel Canadian and British citizen all her life and living in the U.S. since the age of 4, my friend Rachna voted for the first time as an American citizen this morning. When I saw her in line at her polling place her smile was wide and she had her husband in tow to take pictures of this special day. We, who have had this right since we were 18 yet fail to exercise it, should think about the excitement that our fellow citizens like Rachna feel today.

Rachna exercising her constitutional right for the first time

I’m not going to guilt trip you by saying that generations of people sacrificed a great deal so that we — not matter our skin color or gender — could execute this right of ours. Nor am I going to tell you that if you don’t vote today, you really lose the right to complain about what happens over the next four years. I don’t even care who you vote for (well, that’s not exactly true, I feel passionately about the choice that this election represents, but as I have said over and over again, this is blog is not political – but my twitter handle is) just as long as you do it.

Vote! Find your polling place and go…right now. If you need help getting there Uber, my new favorite car service, is offering free rides to or from polling places for first time customers. So leave your computer and run, don’t walk, or take a black car. I will be waiting here when you get back. 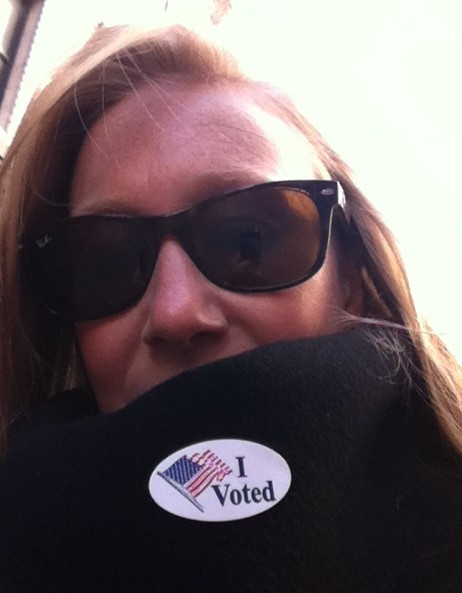 3 thoughts on “Today’s The Day”