If you read this blog on a regular basis you know that one of my longest-running adventures is learning to upholster. I started taking classes at the Eliot School of Fine and Applied Arts over a year ago and quickly brought a piano bench and ottoman back to life in vivid color.  After those small victories I took on a huge challenge: a wing chair.  When I last updated you on this endeavor, I had broken off one of the legs of my chair in some Valentine’s Day dramatics.  That one night has really epitomized the entire project: one set-back (of varying severity) after another. My teachers, Paul Devito and his son, also named Paul, managed to re-attach the leg using a lot of wood glue, along with nearly 100 staples. 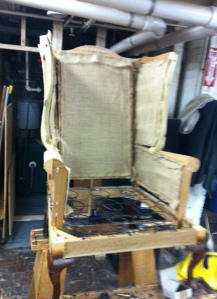 Since I broke my leg I have made slow and steady (with an emphasis on slow) progress on my wing chair.  After stripping the chair down to its bones and tightened its springs, I have been building it back up with layers of cotton, foam, burlap, muslin and finally fabric. This may sound simple, but it’s not, at least not for me. I have been working at a painfully slow pace, unsure of my next move.  My teachers assure me that I am right on track, but I am frustrated to still be working on this chair. I realized that one of the things I liked best about my early small-scale upholstery projects was the gratification I received from finishing a project in a handful of weeks and having physical evidence of all my hard work.  This style of chair is among the most difficult so I realize I should cut myself some slack, but I am not all that good at that.

layers of cotton, foam and muslin

So this past week, when I hit a milestone (the entire front of my chair now has fabric on it), I was overjoyed and reminded why I fell in love with upholstery in the first place.  But should I — or anyone for that matter – only feel a sense of satisfaction from success? Shouldn’t I be satisfied with the experience, and the fact that I am learning how to upholster as I go? Intellectually I know that answer is yes, and as I move closer to completing my chair, I will try to keep that in mind.

Now, don’t get me wrong, the upholstery process has been a lot fun; my teachers are incredibly knowledgeable and patient with me.  They are also hysterical.  One example is featured in the video below; upholstery tacks are actually sterilized before they are sold so that they can be put in one’s mouth and pushed out with one’s lips one by one on to a magnetic hammer.  This cuts down on the time it takes to tack material to the chair before you staple it into place and it’s known as “spitting tacks.” I have never had luck spitting tacks and nearly swallowed a tack mid-sneeze. After 25 years in the business my teacher is very good at this.  It takes him under three minutes to do something that takes me more than 20. Plus he’s not afraid of swallowing tacks because he has done it before, three times. See for yourself.

Despite all my self-directed frustrations, the upholstery process is still extremely enjoyable.  After a though day at work using my brain, there is nothing better than getting physical and ripping, hammering and going crazy with a staple gun.  And hopefully in the not too distant future I will have a gorgeous chair to show for it. Until that time, I resolve to go a little easier on myself, I am still just learning after all. 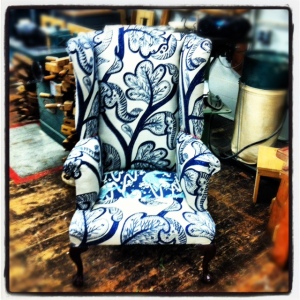 9 thoughts on “Patience Is A Virtue”